How was Hawaii created?

Legend says that the ancient Chief Maui created the Hawaiian Islands by pulling them up from the bottom of the sea with his great fishing hook. By telling his brothers that he had hooked a giant fish, he tricked them into rowing the boat strongly enough to pull up several islands. Thus, the Hawaiian chain of islands was formed.

The science of island formation

Geologists, however, have a different story to tell. Hawaii is one of the biggest volcanic hotspots in the world. Throughout hundreds of years, repeated tectonic and volcanic activity pushed up land where there was none – in the middle of the great Pacific Ocean! Today, Mauna Loa on the Big Island of Hawaii is the largest Volcano on Earth with more than 17 000 meters or 56 000 feet in height from its deep sea base up to its snow covered peak. Other than atolls, which are formed by coral reefs and don’t reach very high above sea level, volcanic islands are usually tall, cone shaped mountains that rise high above the ocean. The Big Island reaches so high, it developed several climate zones, from its tropical beaches, across hot volcanic deserts, through lush jungle up to its freezing cold mountain peaks.

But how exactly are volcanic islands formed?

Volcanoes can usually be found along the edges of tectonic plates. The so-called Hawaiian hotspot however, is located right in the middle of the Pacific Plate. A volcanic hotspot is a place where the earth’s mantle melts into magma, which rises up and causes volcanic eruptions. How deep they are and how they form is still unknown. A well accepted theory proposes that the pacific plate has had a tendency to move in a northwestern direction during the last 70 million years. The hotspot however, stayed stationary and created a line of volcanoes that spreads across 1600 miles, or more than 2500 kilometers today – the Hawaiian ridge.

To the north west of the well known Islands of Oahu, Maui and Hawaii, there is a long chain of smaller and older islands. They range from the oldest and smallest in the northwestern part of the ridge up to the youngest, largest and most active island of Hawaii on the southeastern end of the ridge. As lava still flows on Hawaii and volcanic eruptions are quite frequent, the island is still growing. Off the south shore of the Big Island, there is an active submarine volcano called Lo’ihi, which will eventually form the next island in this chain. As lava pushes upward with every eruption, new land mass builds up until it breaks the surface of the ocean and becomes permanently elevated above sea level. An island is born – fertile and ready for life to settle on its surface. 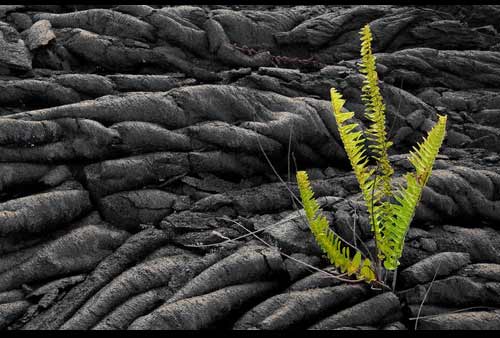 First life on a new island

When a new volcano rises above sea level, its surface is black lava with neither fauna nor flora on it. How quickly it can be colonized by life depends on how near it is to other land masses. Landlocked volcanoes like Mt Saint Helen are covered by new forests in no time after each eruption. Volcanic islands however depend on birds and flotsam to deliver seeds of plants. The Hawaiian Islands are more than 1500 miles or about 2400 kilometers from the nearest landmass. With such a huge distance to cross, it took the islands hundreds of years to be completely colonized by life. The isolated location in the middle of the ocean led to the development of a unique ecosystem with countless endemic species.

As impressive as Hawaii’s mountains may seem when seen from the shore, remember that each island is only a tiny visible fraction of a gigantic volcano. The flora and fauna on each island is the result of thousands of years of evolution in isolation. Let the unique beauty of Hawaii enchant you on your next vacation, as you discover the science behind – and the wonders above this volcanic hot spot in the sea. 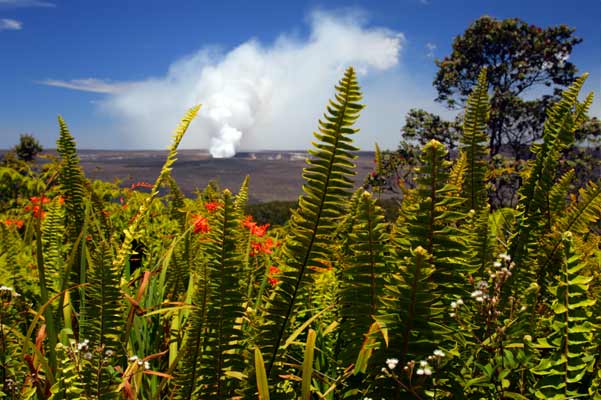